What are YOU smoking today? pics

Not quite as good as the MNS I have curing, but it'll do for now.

Preparing for lift off. bandaid a5s1. 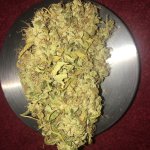 Nice looking bandaid a5s1 bud @ENGLISH ! How was lift off?

Some 9.5 week La Nina (widow leaning pheno) cured for 3 months
I found this gem after only sprouting 3 seeds!
She is unique - initial smell is a lemon/lime/zestyness, followed by a kind of chicken and thyme undertone when breaking apart/grinding up

Quite exhilarating and the landings not too bad either.

Welcome to the site! Join the party and post up something you are smoking!

wow nice. These buds are looking good. I appreciate it.
L

Did you smoke it yet? Is it better than the Wedding Cake or the Home Grown Leaves you posted up earlier? Taste?

Haze, aka strawberry cough x ssh
most of the day
&
Pre98 Bubba Kush thats getting long in the tooth
this evening

With all due respect to Shantibaba, his awesome site, and all the great people on it, I'm sorry I haven't been able to post up any MNS gear. I didn't have any because I never heard of this site until I joined a couple months ago. That is all about to change

Did you smoke it yet? Is it better than the Wedding Cake or the Home Grown Leaves you posted up earlier? Taste?

It's much more of everything except maybe the flavor. Mind you it's outdoor grown in dirt from my backyard
with zero fertilizer. Smell is on the citrusy side, taste is mild. I won't being growing using this method, or medium again.
I actually found the high to be much more intense and elaborate after 1 week drying as opposed to the 6 week cure.
Outdoor never was my thing tbh, I'm a city person.

With all due respect to Shantibaba, his awesome site, and all the great people on it, I'm sorry I haven't been able to post up any MNS gear. I didn't have any because I never heard of this site until I joined a couple months ago. That is all about to change

Looks like MasterKushSkunk you got there. Hey Monsterman! I can't wait to see the monsters you grow in your backyard with those MNS seeds!

Today's another story, can't hate on the outdoor. Le menu du jour is:
Amnesia I snagged from the spring cleaning auction.
You have to risk it for the biscuit!

This one's got my head LIT up like a Christmas tree at the Illuminiert Festival. haha
Mind you, I grew it with the AB in coco, also let her get an extra week inside.

Nice looking bud, @acrid!!! No wonder you got LIT up! How was the taste?

@musashi, Hey Monsterman! I can't wait to see the monsters you grow in your backyard with those MNS seeds!:

ha ha Monsterman! I would love to earn that nickname! I spent the last 2 years wondering where I can grow some plants in soil. Still looking. I live in an area of 1.2 million people. No big cities, just urban sprawl everywhere. Houses and people friggin everywhere. Growing is illegal here. So, I am limited to 5gal containers. Can't grow monsters in them! I tried 7 gal containers last year but they are too heavy to move around(when the plants are monsters

) which must be done where I grow. So back to 5 gal containers and smaller plants. But monster potent!

Example of a plant being choked by 7gal container. You can see by the 'trunk' on her that if she was in the ground, she's maybe a monster! Good yielder though - 28oz of trimmed bud. Best smelling pot ever

Cured 2.5 months now but have not had time to try it!!!! The plant on the left has monster potential if not in container. 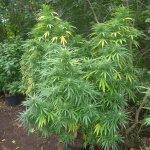 5 gal. containers? Forget about it. Yet that is what I am restricted to next year. Nice plant but no monster. Anyone out there in upstate NY with a little plot of land I can use. I'll grow you some trees and split it with you!

Yeah, musashi, I did pick up some MasterKushSkunk! These last 2 years I have been growing - nothing but Master Kush, Super Skunk, Northern Lights, and Jack Herer. So MasterKushSkunk seemed like a slam dunk! I said I had no MNS gear but 'Nevil' did some work on the strains I grow so somewhat related to MNS? I also picked up some Early Queen(Nevil) as it is supposed to finish in September. Late September here can be snow or 80 degrees. I also picked up some G13XAfghan Skunk on your recommendation! I am most excited about those seeds. Not sure they will finish here but I have an idea about using my garage as a greenhouse for a month to finish her! ha ha With these MNS seeds next growing season is going to be hellafun! I learned a lot this second grow, hoping some day to do it right! One important thing I learned on this site is - I don't know jack! Just a lucky grower I guess. Every day on this site I get schooled! It's like going to college for free and your homework is growing plants!

Speaking of monsters, we have a new member, @RileyQuin, he can grow trees and I think he may have planted a crop. Pay attention when he posts up if you like outdoor monsters! I sure do!