Only one new death outright.

Lady Cane f4 was vaporized by insects. I saw some sucking mouthpiece damage and mite webbing last time but didn’t spray her as she was halfway through flowering. She was a cocoon at update. Must of been dead at least a week by the look of her. (Removes hat)
Kerala. No sex. I cut back to one leader. Stubbornness would be the reason I’m not chopping outright. No longer about usefulness.
I want to know gender before I kill it.

High Biscus #1. This shady lady has only one job. Make babies if Kerala ever comes around and is in fact a male. Otherwise she goes when Kerala does.

SkHz x AfHz. She’s on the left, PInk Floyd #1 on the right. The trench foot last time on SkHz x AfHz which I was dismissive about elevated and took out a XL garbage bag of branches. Thanks to the “Plant Doctor” section and it’s contributors for helping me. Amazing smells of heaven.

Flo. Picked a handful of rot out of her buds so far. Not bad considering. Just about 3 more weeks on her.I love her long buds. Great spicy/fruity/hops nose.

U2. Picked about 2 handfuls of moldy bud out. Again, not bad considering, she’s got a great budding structure and will yield well if her pace continues. Old gym socks and Italian herbs emanating so far.

Pink Floyd #1. Hazy pheno. She was effected to a lesser degree from the same fun-guy that temporarily hobbled her valley cousin. Also sprayed with neem and fungicide on same schedule. PF #1 is on a lower terrace of the river valley but is not small. I’d say 8-9ft tall.

Pink Floyd#2. Another but neglected hazy pheno. By herself in the middle of nowhere. She’s lightly pollinated by a male PF that was previously in the same hole. Also slow to flower but not as late as sister PF#1. Smells are delicious Afghan/Skunk so far.

I heard the weatherman say no rain in my forecast for at least another week. I'm hoping for two...
S

@slabsofdank, my friend, another two weeks is exactly what my U2 needs to finish up. Fingers crossed you get your two weeks as well.
U2

Five more weeks is the magic number for me. Yesterday I pollinated SkHZ x AfHz, PF#1, and High Biscus with Kerala.
My first frost date is usually between 10-25 November. I’m hoping to push that envelope to get mature seeds and mature flowers from all 3 moms.

Kerala tops. Finally. Going out to meet the ladies.

. Currently in traction trying to “rub some dirt on it and walk it off.” Tough girl.

Pink Floyd #1. Took this pic to give idea of structure. She lost a little in the gale but overall amazingly intact.

Pink Floyd #2. She was laid over but nothing a stick couldn’t straighten out. She somehow doesn’t look so busted in person.

Flo. She came down 2 days ago. F’d in the A. Moldy and busted. To truck through our summer is no easy task. Sorry to see this one finish so poorly.

great for a guerilla the u2 look very good
S

Forgot to add High Biscus pic. Won’t be done in time for

@musashi, I don’t want to take credit for camouflage, it was an accident, all those bamboo stakes are supporting the branches that the hurricane tried to tear off. And if you mean smokeable buds off Flo, the answer was no. I would open up any bud and there was little fuzzy purple mold inside. I tossed the whole thing in the ditch. And I have no smoke at the moment. I would of smoked anything if I didn’t think it’d give me the ‘rona
Last edited: Oct 22, 2020

"And I have no smoke at the moment."

Dang, S&G! I wouldn't wish that on anyone. If you were just a wee bit closer I'd spot you a jar of Orange Chameleon from my guerilla grow until you harvest. I'm sure you will find something special out of that lot when you harvest!

I believe you would dear friend, and the knowledge that many others here would do the same humbles me. It truly is the thought that counts.
It’s going to take me a few days to sort through this pile of debris, mold, and broken limbs. I’ll be back with a detailed casualty report soon.

Until then, Mr Zevon

After joining this site and finding this thread, I decided to use a couple extra plants for a guerilla grow, something I have not done since the 70's So yeah, Shrimp&Grits, this Buds for you! I ended up growing this because of this thread, so yeah, I'd give you a jar if you were a bit closer. Where is 'Neau Regard'?

Orange Chameleon - should have used the green foam coated wire instead of white rope but it's ok, it's curing in jars now! 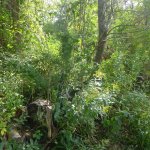 U2 came down with a lot of mold up against the stem where it was hiding from me. I salvaged what I could and made some yummy butter with it. Mmmm

SkHz x AfHz got her ass kicked during Delta, Zeta was the “double tap” that finished her for good. I lost a lot to mold, and she’s down a couple weeks early, but a few jars of hazy smoke are a welcome site. She was able to make a hundo mature seeds from male HB, her branch seeded w/ Kerala is the only branch I left on her. I don’t think she’ll live long enough to make mature seeds with him.
Pink Floyd #1 was able to withstand the brunt of both hurricanes, but I lost the whole big bubblegum tree to mold. Like Flo, it was literally in every bud. Super bummer. I picked through that plant for hours with tears in my eyes.

No pics of those two, it was what we in the infantry would have called a “hasty retreat”. Yeah, it was ugly.

Pink Floyd #2. Somehow she is the only plant I have left alive and getting enough sun to finish properly. She survived both hurricanes and only lost a few buds to mold where I had lashed her to the mast. Pic from a bout a week ago, she comes down Friday. Please cannabis gods let me have just one fire ass fully matured Haze bomber. A meager few ounces on her, but I am begging.

@longball I’m really excited to see you having fun. That Orange Chameleon looks great.
Neau Regard is wherever there is ANY restrictions on ANY plants ANYWHERE.

edit to add a jar pic of SkHz x AfHz

High everyone, Happy Holiday’s.
Pink Floyd #2 came down on schedule, I lost the head bud to mold but the rest of it is curing now. Sweet berry yogurt and a touch of vanilla/pepper from the Haze. Delicious.

SkHz x AfHz did not live long enough to make seeds with Kerala. She succumbed to fungus pressure and I’m worried she was internally infected before her and HB bumped uglies. Would be a drag to toss those seeds due to the threat of B. Cinerea overwintering in the seeds. Will check a few seedlings in the spring. Any thoughts or ideas?

The High Biscus female came down Nov 22nd. She’s been living in the shade since September. Amazing lime and pepper smells, fantastic mold resistance, greasy resin. She made a hundred or so mature seeds with Kerala. That should be a fun cross. New Years Haze for sure.

That does it for me this year. Thanks for sharing my struggles.

I had the good fortune to gift some jars out recently and that makes it all worth it.

Thanks for sharing your guerilla grow adventure with us. Sorry to hear about the problem with mold, I lost 6 complete plants to mold myself! I am happy to hear that you were able to harvest enough to gift a few jars. That rocks!
Looking forward to your growing adventure!